French fashion house Givenchy was founded by designer Hubert de Givenchy in 1952. His vision was clear from the beginning, which was to give women in the postwar era more options by designing “separates”—couture tops and bottoms that could be mixed and matched at will, an innovative idea at that time. He met actress Audrey Hepburn in 1953, who became his muse and long-time friend, and dressed her for the next four decades. This included the iconic little black dress Hepburn wore in Breakfast at Tiffany's. In the '70s, he launched a menswear line, and became one of the first designers to put his brand on more than just clothing. There was Givenchy silverware, china, even hotel draperies. The brand became a part of the LVMH group in 1988, and Givenchy retired in 1995. After that, Givenchy was a launchpad for young luminary designers like John Galliano, Alexander McQueen and eventually Ricardo Tisci, who held the position for 12 years. After Tisci's departure in 2017, British designer Clare Waight Keller became the first woman to helm the house.

You might know Waight Keller as the designer of the dress worn by Duchess of Susex Meghan Markle for her wedding to Prince Harry. Previously the artistic director at Chloé, Waight Keller has made her mark at Givenchy. One of the first things she did was to bring back haute couture. Following Monsieur Givenchy's philosophy of designing from the shoulders, she presented her first collection for Spring 2018 as a co-ed show, and there were sharp, strong shoulders aplenty. She brings a new vision to the house–modern and traditional, bold and wearable, elite and accessible, strong and feminine.

Waight Keller has a talent for creating hit accessories, thanks to her time at Chloé. She introduced a new bag, the GV3, a 1970s style crossbody with a chunky brass chain and vintage-style clasp. Its name comes from the initials of the house's landmark address on 3 Avenue George V in Paris. Many of Givenchy's notable classics were designed by Tisci, such as the Antigona, Nightingale, Horizon and Pandora. 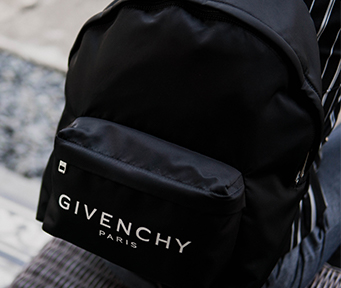 Many of Givenchy bags, like the Antigona, are structured.The quality of the leather should be solid and bag should not lose its shape. Authentic leather should appear supple rather than plastic-like. The Givenchy logo should be balanced, equally spaced and cleanly finished without any adhesive marks or rough edges around it. For bag handles, the seams should be clean, straight and in the same color as the handles. The leather of the handles is also always in the same color as the rest of the bag. 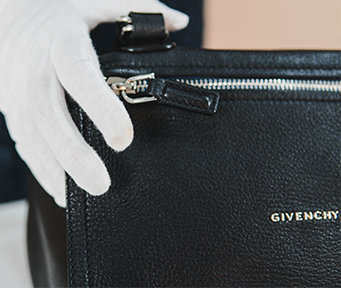 Previously, Givenchy bags used zippers made by Raccagni, but since about 2015, the brand has started using zippers branded with their own logo. More precisely, it has “Givenchy” and “Paris” in a smaller font underneath. 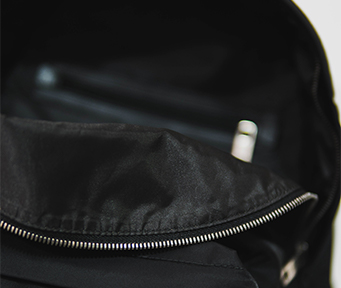 They are lined with solid cotton twill and should match the color of the leather on other interior details like the label and zipper pocket. While not attached to the interior with adhesive, the lining is well-constructed to fit perfectly inside the bag. It should not be loose or bunchy, and should have one center seam across the bottom. 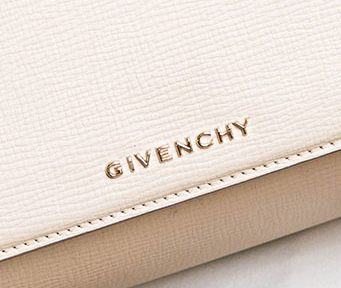 The code format of Givenchy's serial numbers follows LVMH standards. It consists of 6 characters – the first 2 mark the location of the production. The 4 following numbers stand for the period – the first and third digits represent the week in which the bag was made and the second and fourth digits are for the year. An example of a legitimate serial number is “3C1122” – “3C” is the workshop location, while the four figures are for the twelfth week of 2012.