Prada is a household name in fashion, so much so that there's even a Hollywood film, The Devil Wears Prada, named after it. The brand has been synonymous with cutting-edge style, and is not one to follow trends. Prada was founded in 1913 by Mario Prada, a Milanese craftsman, who opened the first store in the prestigious Galleria Vittorio Emanuele II in Milan, selling bags, trunks and travel accessories. In 1919, Prada obtained the title of Official Supplier of the Italian Royal House, making the brand a benchmark for Italian aristocracy and upper-middle class. It's also the reason the Prada logo has the House of Savoy coat of arms and the figure-of-eight knot. The brand introduced women's shoes in 1979, and its first womenswear line in 1988. The early 1990s saw the brand expanding their stores internationally. Their stores could be recognised by a special shade of green that dominated its interiors, which became known as "Prada green". Now, Prada continues to transcend trends, pushing innovative creations inspired by disciplines that are, at times, apparently far from fashion, such as art, film and photography.

Miuccia Prada, the youngest granddaughter of Mario Prada, joined the family business in 1978. She has been the creative director of Prada ever since, running the house with her husband and co-CEO, Patrizio Bertelli. The award-winning designer has a knack for setting trends instead of following them, such as in 1984, when she unveiled a series of black nylon handbags and backpacks with understated labeling—a stark contrast to the logo-heavy clothes that dominated fashion at the time. She has also once said, "If I have done anything, it is to make ugly appealing. In fact, most of my work is concerned with destroying — or at least deconstructing — conventional ideas of beauty, of the generic appeal of the beautiful, glamorous, bourgeois woman. Fashion fosters clichés of beauty, but I want to tear them apart.”

Prada is no stranger to iconic handbags, with the Prada Galleria, Cahier and Promenade being some of the more popular styles. The Prada Sidonie, from their recent Resort 2019 collection, has also been dubbed one of the must-have bags of the season. Of course, we can't forget about nylon bags when talking about Prada, which have been reinvented to keep up with our changing times. In 2019, the brand launched Re-Nylon, a new capsule collection made with a new regenerated nylon, ECONYL®️, produced by textile yarn producer, Aquafil. The recyclable material is obtained through the recycling and purification process of plastic waste collected from oceans, fishing nets and textile fibre waste. The collection includes a tote, a duffle, two backpacks, a shoulder bag, and a belt bag, with a reworked Prada logo that incorporates the classic symbol for recycling, a looped arrow. 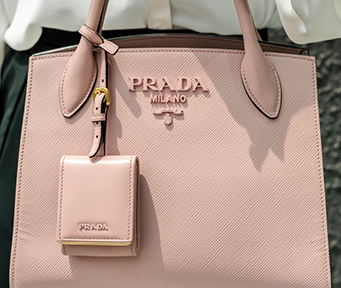 Stitching on the bag should be consistent and perfect. It is important to note the uniformity of the thread stitch length. For the Prada logo on modern bags, the right leg of the ‘R’ should have a gap between the ‘R’ loop and the ‘R’ leg. The R’s on vintage Prada bags do not have the gap but note that the rest of the letters remain the same. 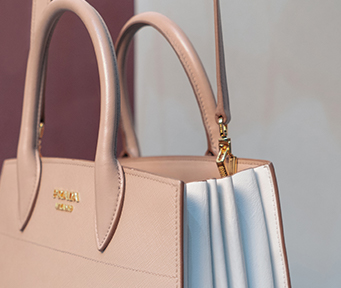 Metal of zippers should be identical to that on the logo and straps. Zippers should have the logo on one side and the zipper company on the back side. Prada uses YKK, Riri, Opti, Ipi, and Lampo to manufacture all their zippers. Note that even if a Prada bag has signs of wear, wear should not change the colours of the metal. Gold hardware should not turn silver. A Prada bag will never have hardware that comes in a combination of 2 colours. 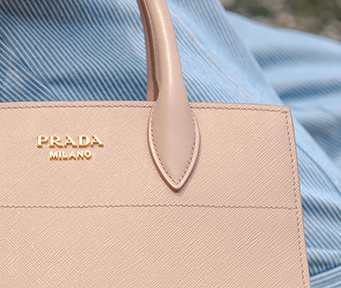 The interior lining of Prada bags are made from either fabric, leather or satin. The fabric will have a pattern that has alternating lines of the Prada name and a rope motif. Note that not all linings will have this pattern. The colour of the lining should match or complement the exterior colour of the bag. 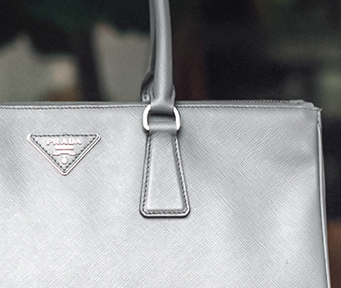 Older styles display “Prada Milano Made in Italy” done in three lines. Newer styles, however, will have only two lines that read “Prada Made in Italy.” Some non-leather styles feature the leather patch on the interior instead of the ceramic plaque. There is also a hidden number tag usually found in one of the interior corners, or inside the internal pocket. It's a white tag with a black factory code number.