Yves Saint Laurent founded his fashion house in 1961 as a house of haute couture. The Parisian designer previously spent time at Dior, where he was creative director. In 1966, he introduced his own ready-to-wear line, Saint Laurent Rive Gauche, and revolutionised modern fashion. Known for blurring the lines between men's and women's fashion, he took traditionally masculine items and reworked them to create his own take on womenswear. The Le Smoking, a sharp, tailored black tuxedo, remains one of Saint Laurent's most iconic creations.

Designers Alber Elbaz and Tom Ford have had their turn at leading the label, but Hedi Slimane's run as creative director is particularly noteworthy. He made the controversial decision of rebranding the label and dropping 'Yves' from its name. Now, Saint Laurent is known for its edgy glamour and cool, youthful look. Anthony Vaccarello took over as creative director in 2016, and continues to stay true to the brand's philosophy of working with pieces traditionally regarded as menswear. He envisions Saint Laurent as a house for women of all ages and colours, that makes women feel empowered and free.

The iconic YSL logo has made the brand's bags very coveted. Some of Saint Laurent's best-selling styles include the Sac de Jour, Envelope Chain Wallet and the Kate bag. Anthony Vaccarello launched the new Vicky bags in the #YSL15 campaign for Fall 2018. The quilted leather bags adorned with the YSL logo come in both patent and normal leather. 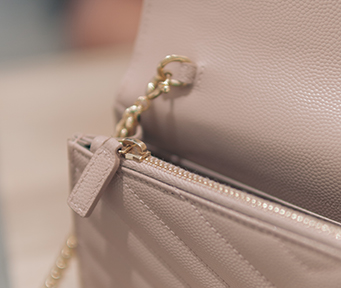 The edges of an authentic Saint Laurent bag should be consistently finished. Stitching should be perfectly aligned – any signs of loose threads, double stitching or similar inferior quality is an immediate red flag. 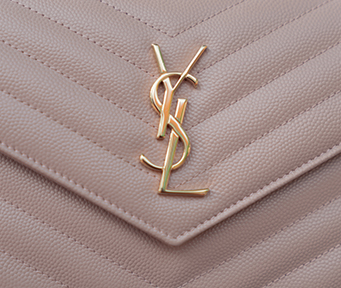 For the YSL logo hardware, pay attention to the font and where the letters overlap. The Y’s left arm — thicker than the right — sits beneath the S, while the right arm is above. The S then swoops behind the bottom half of the Y, overlaps the L and tucks behind it. Do take note that the slope of the L starts wider at the top and narrows as it hits the horizontal leg. The S will also change weight at its middle.

Larger snaps will be marked Saint Laurent Paris, but grommets and small snap closures on wallets will not. Saint Laurent zippers also have a signature bend as they have a crimp at the base. These zippers can also be found on YSL jackets. 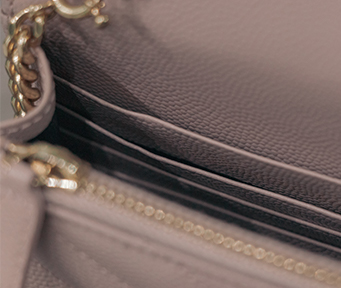 Check the lining to make sure it’s a black textile with leather trim. At the interior, the leather will be glued to a textile lining to create a seamless transition. On a wallet-on-chain, each card slot should be functional and have a base. Sometimes on counterfeits, the card slots will be slits and the cards will fall through. 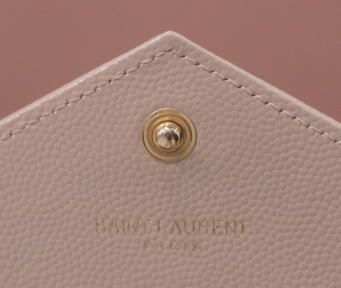